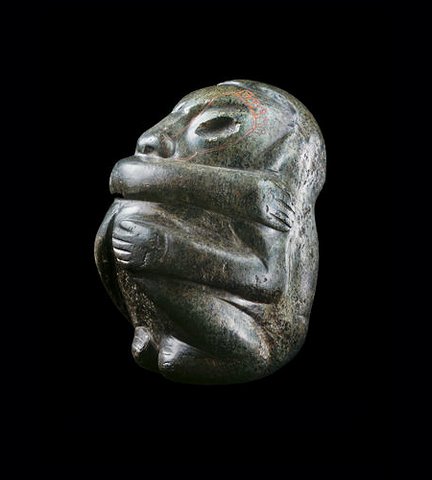 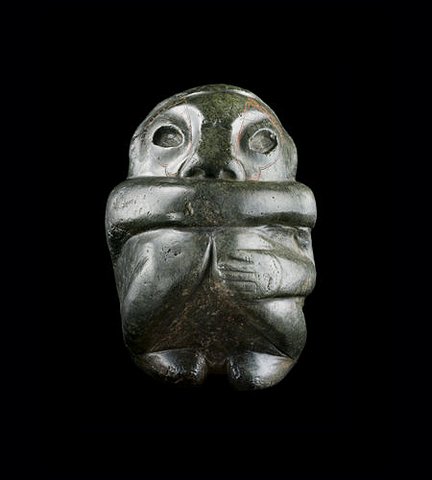 The worldview of the Olmec civilization was that of a multi-layered world inhabited by a pantheon of deities. A world tree (axis mundi) perforated and stabilized the constituent layers of sky (upper world), earth, and underworld, but also provided a highway to traverse them. In order to travel between the realms to effect change, cure disease, etc., a shaman had to undergo a spirit journey in a transmuted state aided by animal helpers. Sculptures show human shamans in varied states of transforming into animals for such passages.

An enigmatic, crouching figure, carved of hard greenstone, may be part of the myriad representations that relate to the shamanic journey. This figure, from Tabasco and dated to 1500-800 BC, is compact and only slightly modified from the original cobble of which it was carved. This figure seems to combine human and animals traits. Yes, he is seated in an anthropomorphic crouch with arms wrapped around – the right around the lower jaw and the left around the knee and the hands have five fingers. But the feet are claw-like and the face is somewhat simian with a broad, flat nose. A half scallop, incised at the bridge, furrows the flesh and hints at “otherness”. The almond-shaped eyes, which may have originally held inlays of contrasting material, are set within puffy mounds of flesh. In addition to the hybrid nature of the being depicted, the incised human footprints, circumscribing the eye sockets (and now filled in with red pigment for legibility) may refer to the shamanic journey. It has been suggested that the implied equivalency between vision and footprints (journey) indicates the acquisition of spiritual knowledge. That the mouth is covered, i.e., metaphorically sealed, one may infer that such knowledge will remain secret.