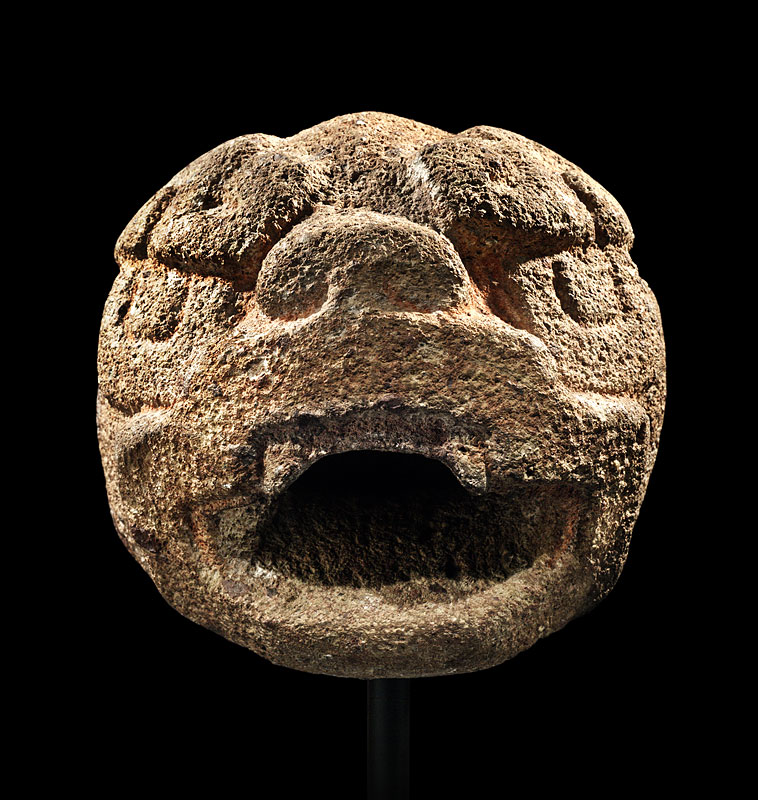 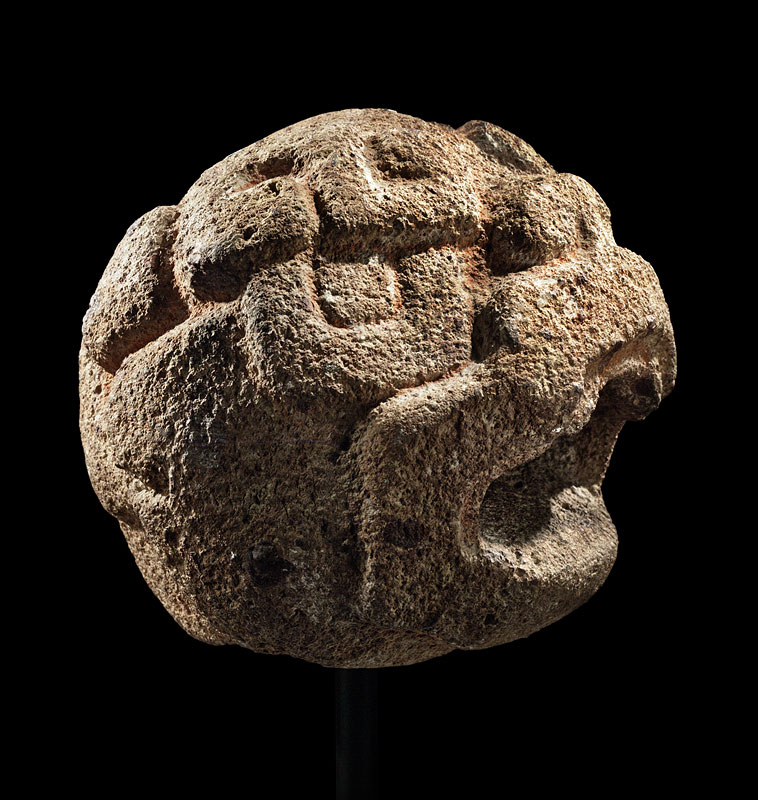 This nearly spherical handstone (or manopla), a piece of ballgame equipment, was carved into the form of a jaguar head with the lower jaw forming a hand grip. (The inside was hollowed out and cut through for the handle.)

The Mesoamerican ballgame was played over a period of three thousand years from the southern United States all the way south to Nicaragua. Veracruz and Maya areas were home to very strong and long-lived ballgame traditions. There were many regional and temporal variations of the game. In some versions, the ball was deflected by the hips and the hands were not used at all. But other versions allowed the use of bats, sticks, or handstones (manoplas) such as this one. The manopla would have been held by a ballplayer to hit and keep in motion the solid rubber ball.

Such loop-handled stones were first identified by Borgheyi in 1961 (see Ekholm, p. 244) as hand protectors by examining ballcourt panel sculpture, decorated palmas, and ceramic figurines of ballplayers. The manoplas were found along with the other ballgame paraphernalia: yokes, hachas, and palmas. Borgheyi determined that manoplas originated in central Veracruz, the heartland of the Olmec. From there, they spread to the Yucatan and highland Guatemala. (Other areas that allowed the use of the hands during play relied on wrappings as protection.)

The facial features of this jaguar, specifically the mouth, recall that of the zoomorphic monster gateway of Chalcatzingo Monument 9 (700-500 BC), an iconic Olmec monument at one time in the collection of the Munson-Williams-Proctor Institute of Art in Utica, New York. This monument depicts the monster’s mouth as the entrance to a cave, i.e., the underworld. The evocation of a passage to the underworld on this manopla is intentional due to the mythology of the ballgame: the ball represented the sun in its daily course through the heavens and the underworld, where it sojourned over night. (Also, the Hero Twins, of later Maya myth, played the game against the gods of the underworld. It may be that the mythology of underworld play originated much earlier than the Maya and was part of Olmec cosmology.)

The jaguar is characterized by huge, U-shaped eccentric eyes surmounted by scroll eyebrows. A wide pug nose projects a bit, but is flush with the raised lips. This large maw has a broad, flaring quatrefoil forming the mouth, framing the exposed upper gum where two fangs emerge at the corners. Behind, there are two large scrolls carved in low relief, emerging from the cheeks. Although there are two, these may represent the tail (as if viewed in profile on each side, independently.) The two halves of the head meet in the center at a gentle peak. As the most powerful animal of the region, the jaguar was an entirely appropriate emblem for a ballplayer to use in his contest.

The vast majority of extant ballgame paraphernalia hails from classic period Veracruz. This manopla is a rare example in pure Olmec style.