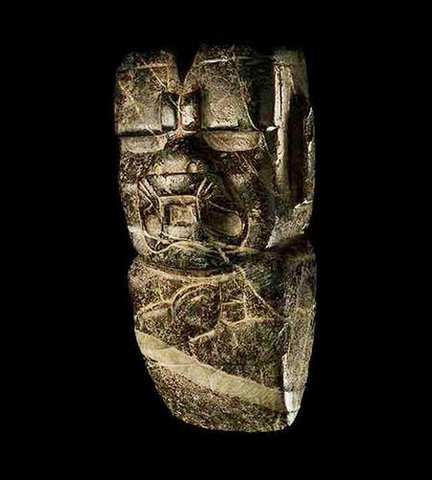 Axes were important prehistoric tools. Their use for clearing fields for agricultural purposes was crucial to the development of the Olmec civilization. By the Late second millennium BC, axes’ utilitarian aspect had engendered ritualistic usage. Votive axes, in the form of deity effigies, may have combined the symbolism of the tool’s raw power with the special significance of the god depicted with a blade shaped body.

Three similar effigies exist. Two are carved of similar stone and one is carved of jade. One of the brown stone figures is in a private collection; the other is in the collection of the Dallas Museum of Art. The jade example is the famous “Kunz Axe”, named after its owner at the turn of the century and now in the collection of the American Museum of Natural History in New York. All of these, and ours, have similar features, scale, proportions, and overall shape. They all depict the deity called God I, the Olmec Dragon or Avian Serpent, a deity associated with the sky, wind, and rain.

Ours is carved of a hard, brown stone with bands of white, probably bands of chalcedony, that are natural inclusions. The deity’s clef head is thought to represent the fissure on the earth from which sprouting corn emerges. His enormous mouth has a flaring upper lip with drilled, down turned corners. The bifurcated elements that crisscross the open mouth have been variously interpreted as fangs of the molting skin of a toad. If the latter is correct, it may refer to a cycle of renewal that reflects that of maize. The dramatic wedge shape of the body, seen best in profile, evokes the shape of a corn kernel. This lends further support to the idea that the deity was connected with the agricultural cycle of maize. Additional sprouting imagery is included in each eyebrow; these are also rendered as cleft heads with lightly incised subsidiary faces with petal-shaped fangs. The position of the anthropomorphic hands in front of the torso, right over left, is common to all four examples and must be a ritualistic stance.