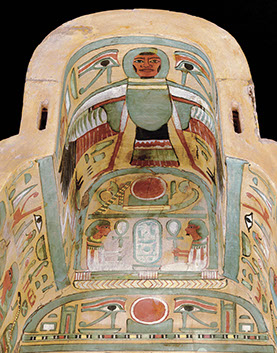 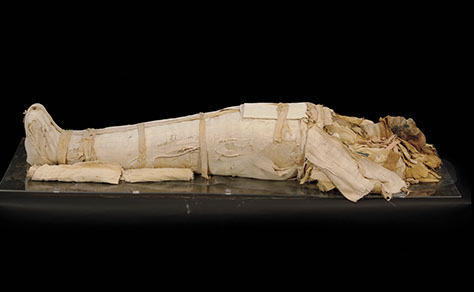 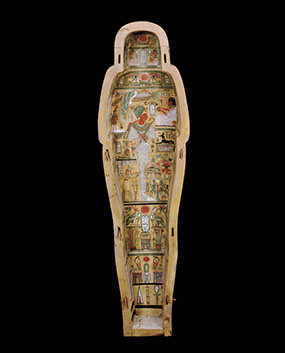 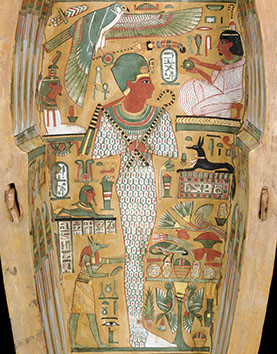 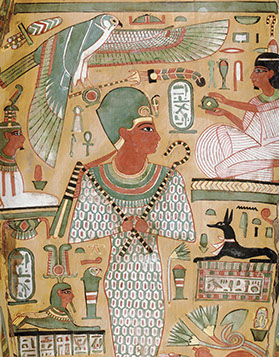 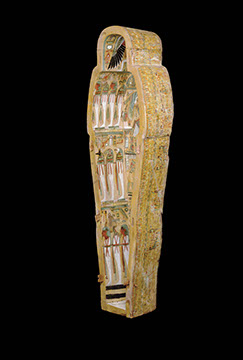 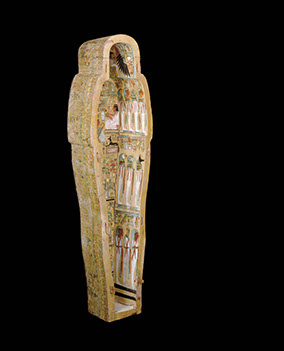 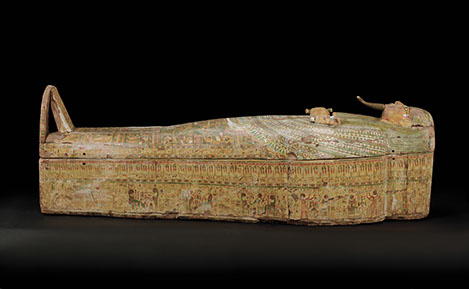 This extraordinary and very well preserved sarcophagus, or mummy case, is anthropoid in form, that is, it is shaped in the contour of a wrapped human body. The lid represents Neskhons in the guise of Osiris, great god of the dead. Brightly colored and with numerous identifying and formulaic texts and mythological vignettes, both inside and out, this sarcophagus is exemplary for its rich iconography and glorious decoration.

Neskhons is attired for the afterlife. He wears a striped, tripartite wig and a plaited beard, both of which are associated with Osiride imagery, lending him an aspect of divinity. The arms cross over the chest, with just the hands visible peeking out from the shroud and the massive floral collar that covers the entire upper torso. The hands grasp emblematic staves. Crossed red bands represent dyed leather straps.

The painted vignettes include depictions of cobra-goddesses, a winged solar-disk, the vulture-goddess Nekhbet, the god Re, Ptah, Ptah-Sokar-Osiris, Anubis, Isis, Osiris, Amun, a Ba-bird, and etc. with identifying inscriptions. Neskhons is named several times in the long inscription which specifies his piety and devotion to the god Amun. Neskhons appears in both mummiform and in human form, wearing a priestly costume. His title of “Stolist” (and additional inscriptions that indicate three generations of priests of Amun in his family: Djed-Khons-Iwef-Ankh, son of Iwef-khonsu, son of Khonsmose) explain the family business as ritual anointing and clothing of the cult statue of their god within his temple. An important female relative is mentioned, as well: Chantress of Amun, Neskhonspakhered.

Additional scenes include depictions of offerings, the Four Sons of Horus (the four deities whose heads grace lids of canopic jars into which the mummified viscera of the deceased would be deposited), a sacred bark in which to travel in the afterlife, wedjet-eyes, and other protective devices. The iconographic elements and inscriptions all served to justify the deservedness of Neskhons of an elite place in the afterlife and the protection of his everlasting spirit.

The fascinating history of the sarcophagus bears mentioning. In 1900, Liberty E. Holden, the publisher of The Plains-Dealer (the local Cleveland newspaper) journeyed to Egypt as part of a “grand tour.” When he learned of the discovery of four sarcophagi by the Luxor dealer, Mahmud Hassan, he arranged for the purchase of this one, its shipment to Cairo for export clearance, and its ultimate shipment to Cleveland. Holden promptly donated it to the Western Reserve Historical Society, where it was proudly displayed. In 2006, the historical society de-accessioned the sarcophagus.