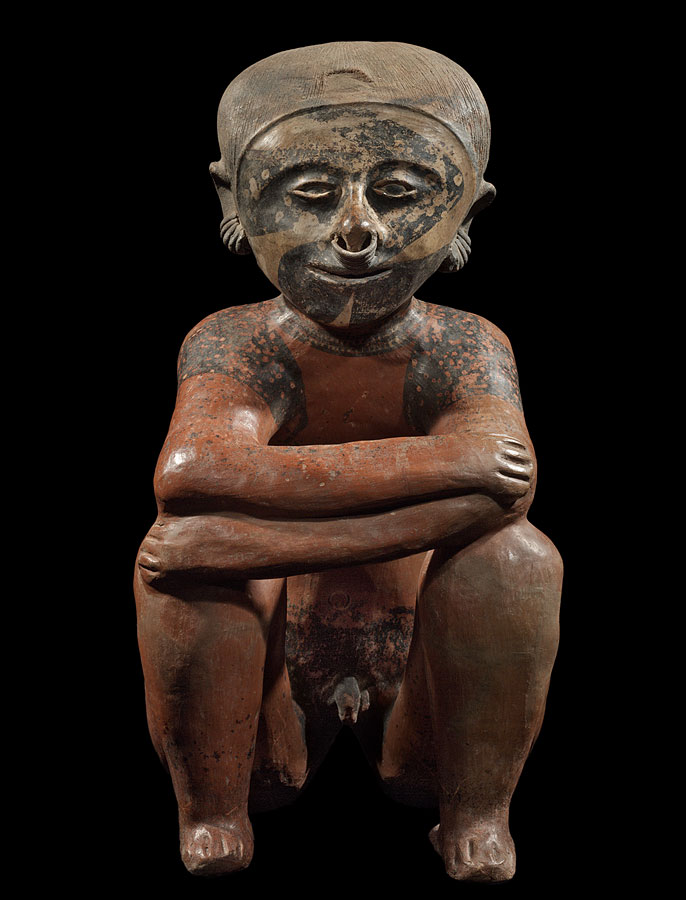 The figure sits with crossed arms leaning on upright knees. His back is straight and he leans forward slightly, looking the viewer in the eye. A gentle smile graces his face, giving him tranquil appearance. Despite his nudity the elaborate decorations painted on this figure, whomever it was meant to represent, marks him as having been significant. Three rows of white beaded necklace are painted around his neck, and black paint encircles the figure’s pelvis and wraps around his biceps and shoulder blades. This same black paint is used to great effect as a mask around the eyes and forehead, and to accentuate the chin (save for a triangular portion to the left of the center). It colors his hair as well, which is incised with thin, evenly spaced lines. Multiple hoop rings pierce both ears and septum. Although the hair is shorn short as far as the back of the ears the rest has been left to grow long; a flat bas-relief tail of hair extends down mid-back. The overlong heels attached to the back of the short foot are meant to stabilize the piece and allow it to stand freely.

As was the habit of several cultures along the west coast of Mexico the Nayarit, to which the Chinesco style of pottery belongs, buried their dead in shaft-tombs. These shaft-tombs were, as the name implies, defined by a vertical shaft beneath an above-ground structure. Horizontally oriented chambers acted as mausoleums, preserving both the dead and their accompanying effects.