EGYPTIAN BUST OF A PRINCESS 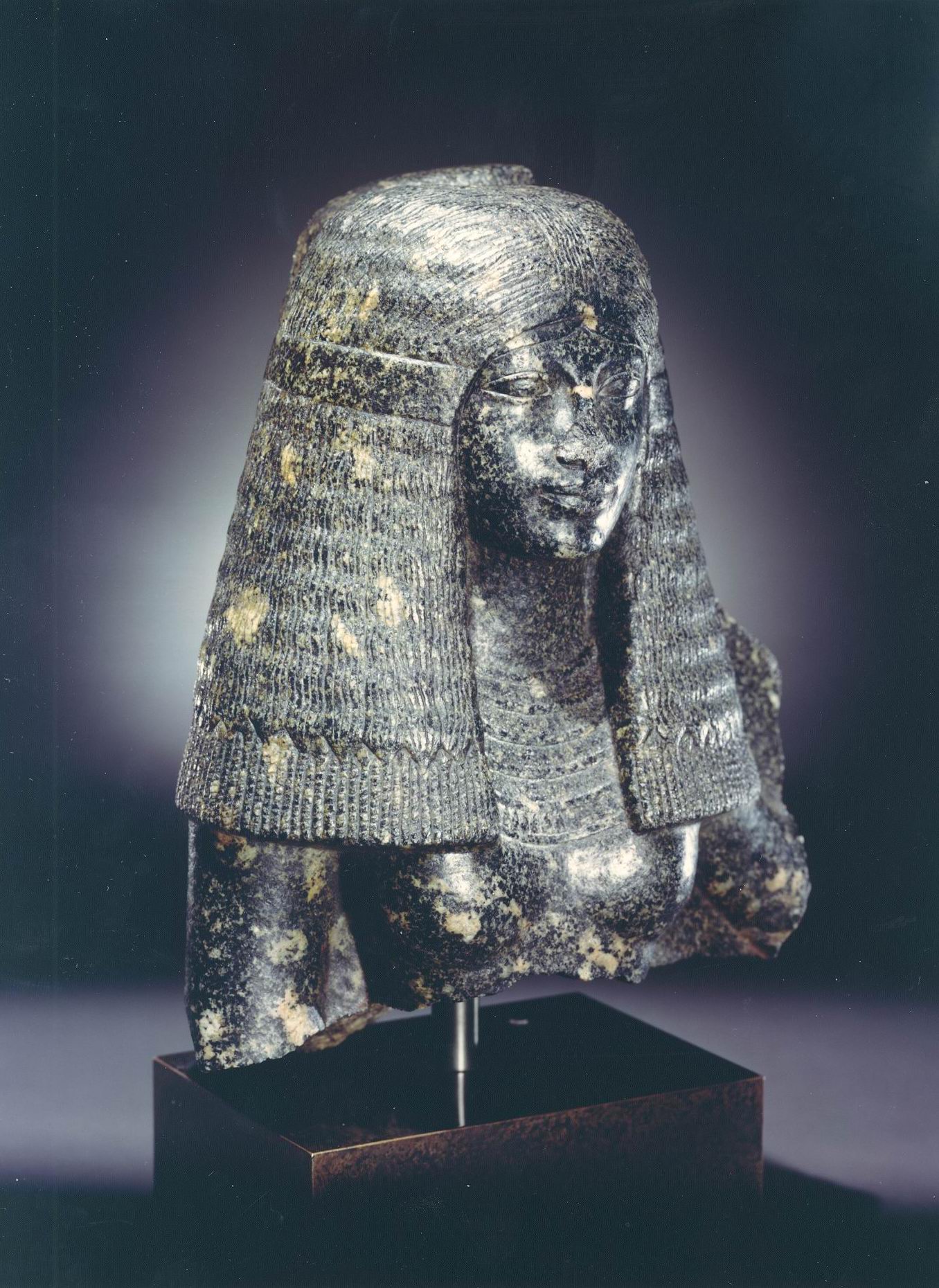 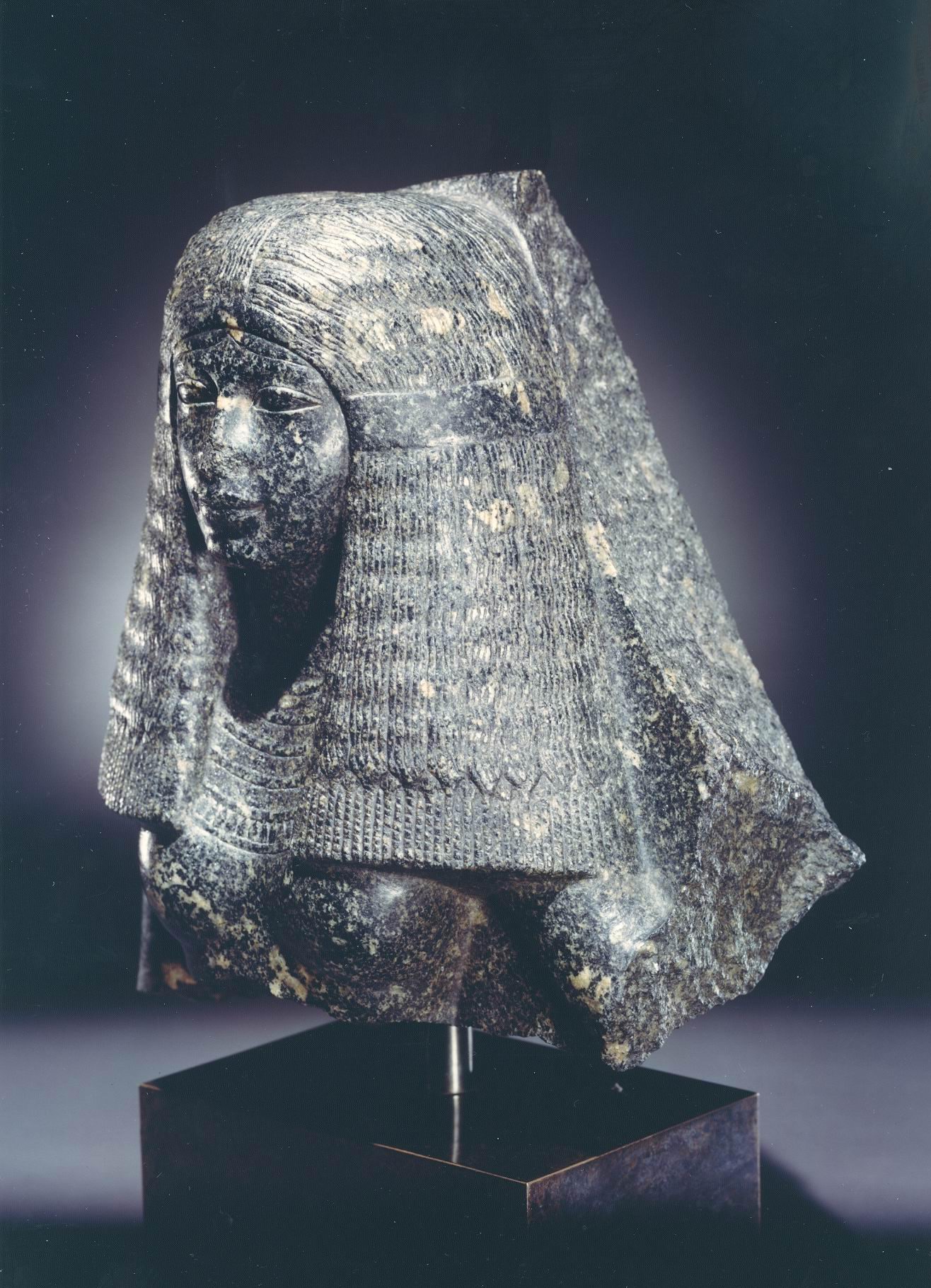 This magnificent bust of a young lady, possibly a princess, dates to Dynasty XVIII.  The sculptural style of this era is characterized as the most refined of all the Egyptian periods and this statue is exemplary in that respect.

Her slender face and body, her high breasts, and her exquisite facial features are quintessential features in depictions of maidens of the period.   Carved from black granodiorite from the king’s own quarries at Aswan tells us she was well-connected.  She resembles her king, Amenhotep III 1381-1343 B.C.), whose benign image with its almond-shaped eyes, small nose and generous, smiling lips is known from more than a thousand portraits.  Her fashionable coiffure and jewelry speak of her wealth.

The young lady is clad in a form-fitting gown and a multi-tiered necklace with cone-shaped pendants between the two lowest strands, but her most extravagant feature is her massive wig.  This falls from a central part, demarcated by longitudinal, striated tresses, to just above her breasts in a series of crinkly, striated locks that are gathered into discrete clusters by tightly twisted ends.  Two broad bands at temple height clasp and control the thick, luxuriant hair.  This type of wig finds many parallels in Dynasty XVIII and in the reign of Amenhotep III, in particular.  Though the wig type may be found numerous times, this particular example has a most unusual aspect.  An incised double curve on the young lady’s forehead represents her natural hair, just peeking out from under the wig.  Queen Tiy’s depiction (op cit.) displays the same feature, an archaism that recalls an Old Kingdom style and that may be a conscious allusion to that era and, thereby, an evocation of tradition and continuity.

This figure was a member of a group statue, her left arm extended and interlaced with that of another figure, the interstices filled by a broad back slab.  As it is unusual for a female to stand to the (proper) right of a male in a group statue unless she is balanced by a second female on the gentleman’s left, it is probable that the group consisted of three personages.  If indeed royal, they would have comprised the king, the queen to his left, and a princess to his right.  Such groups are known from the reign of Amenhotep III.  His four daughters by his chief queen, Tiy – Isis, Sitamen, Henuttaneb and Nebetah – were also granted the title of queen, as the princesses performed the roles of ‘minor wives,’ i.e. consorts to the king.  For this reason, the princesses were depicted in association with their father, whereas the male children generally were not.   Though the identity of the sitter remains unknown and it cannot be said that the sculpture conveys her actual, physical likeness, it is certain that this bust represents the highest ideal of Egyptian youthful beauty and perfection.

The large size and high quality of the portrait suggest that the lady’s husband held an important post or that he and/or his wife were born into the palace. Being of hard stone, this statue was possibly a temple gift in Amenhotep’s capital at Thebes (Luxor).