BOWL WITH TWO GEESE IN FLIGHT AROUND EXTERIOR 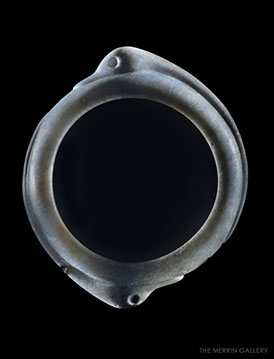 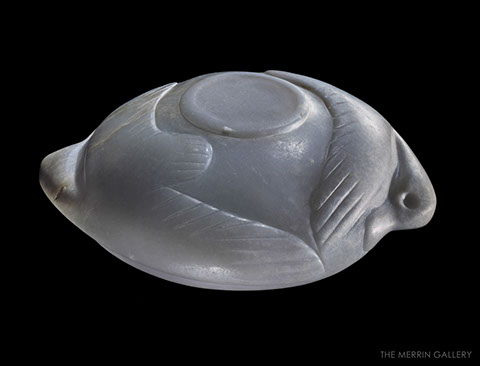 BOWL WITH TWO GEESE IN FLIGHT AROUND EXTERIOR (SOLD)

This exquisite bowl is one of a group, all carved from the same lovely blue marble called “anhydrite”, that was discovered in 1906 in the tomb of Dedu. Not until the twelfth dynasty, the era to which this vessel dates, was this stone used in Egypt. At that time, and only until Dynasty XVIII, stone sculptors carved it into containers known as “toilet” vessels, i.e., containers for precious unguents and perfumes. The source of this stone is not known, but is assumed to be Upper Egypt, somewhere between Abydos and Esna, where almost all of the extant objects have been found. All are small, indicating that the stone was unavailable in sizable pieces. By the time of the New Kingdom, the source seems to have been exhausted.

The shallow bowl rests on a low, circular foot and has a thin rim that projects over the interior. The decoration, rendered in low-to-high relief, depicts two opposing geese in flight around the exterior. Their projecting heads turn sideways, elegantly flowing with the overall form, and offering slim handles for gripping. The birds’ hollow eyes do not have any indication of ever having been inlaid. Their wings are spread on the underside of the vessel and delicate incisions represent plumage.

The translucent stone was employed to great effect, here. Its high polish reveals a deeper blue hue within the center. The perfect condition is remarkable; the lack of wear indicates its use solely as a tomb furnishing.