Categories
Pages
Home » Available - Near Eastern » HEAD OF A BULL »

HEAD OF A BULL 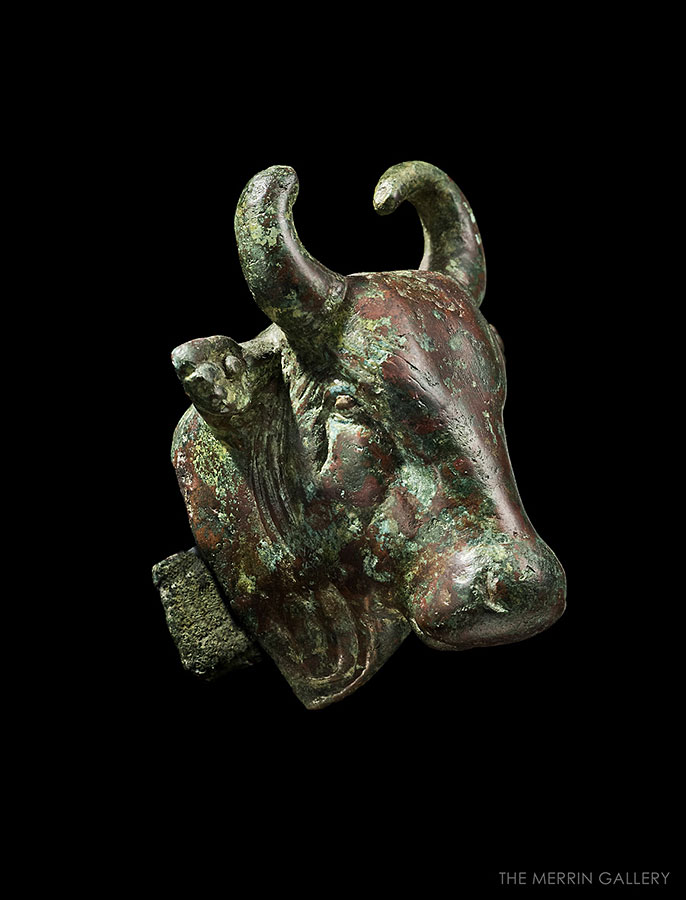 HEAD OF A BULL

Assyrian, 9th-8th century BC
Copper alloy
Height: 3 inches (7 cm)
Provenance: European art market, 1985; Ex private American collection
The bull motif occurs frequently in Assyrian art. Bulls appear as decorative elements on furniture and vessels as well as elements of mythological composites. The most famous are the monumental lamassu, the winged, human-headed bull and his companion, the winged, human-headed lion in the collection of the Metropolitan Museum of Art. Those two monoliths were guardians to the entrance of the royal throne room. The human head represents the king and he wears a crown adorned with triple bull’s horns, emblems of the deity.

The mythological hybrids point to the status and power of the bull image. Likely, zoomorphic bull figurines were made as votives, perhaps to ensure successful animal husbandry. This small metal head is not a fragment, per se. The tenon at the back of the neck shows that it was made to be inserted into a separately fashioned body, perhaps of a different material. Here, the animal is rendered fairly naturalistically with curved horns, a tapered snout, small eyes, realistic folds of skin, and projecting ears that have received a decorative, pleated effect, such as one might expect from an Egyptian image.

The variegated reddish patina of the copper alloy indicates that arsenic was used instead of tin in the mix of metals to be poured into the mold. Thus, the alloy is called “arsenic copper” rather than “bronze”. It is typical of metalwork of Assyria and other nearby cultures.