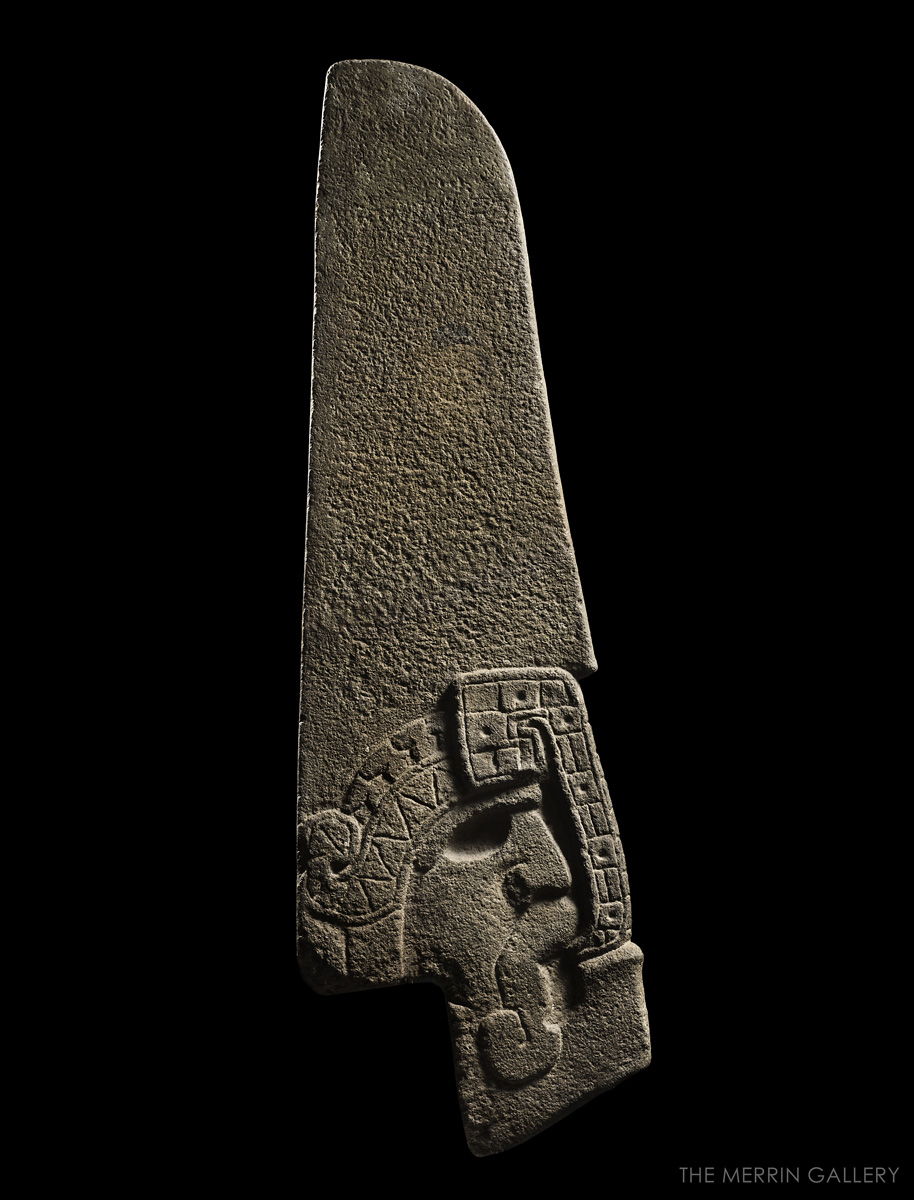 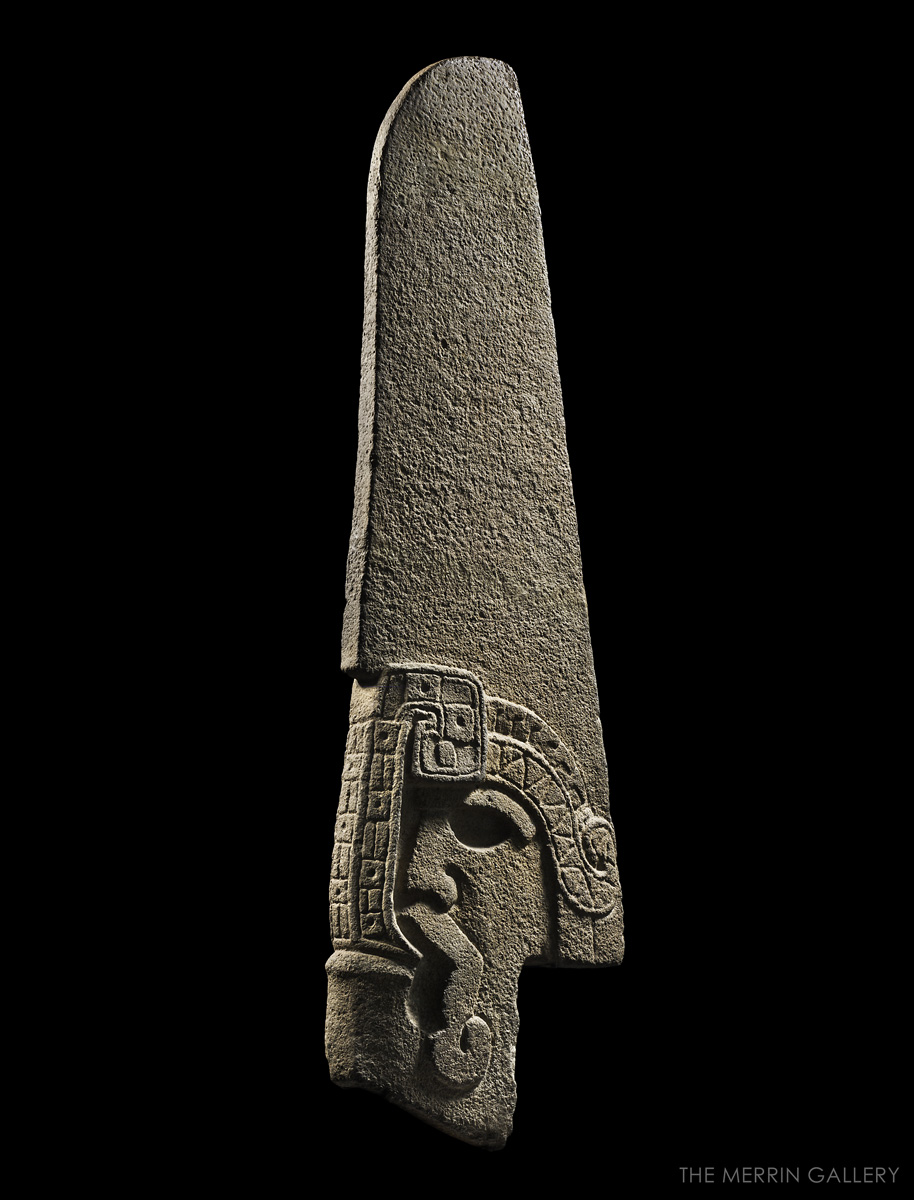 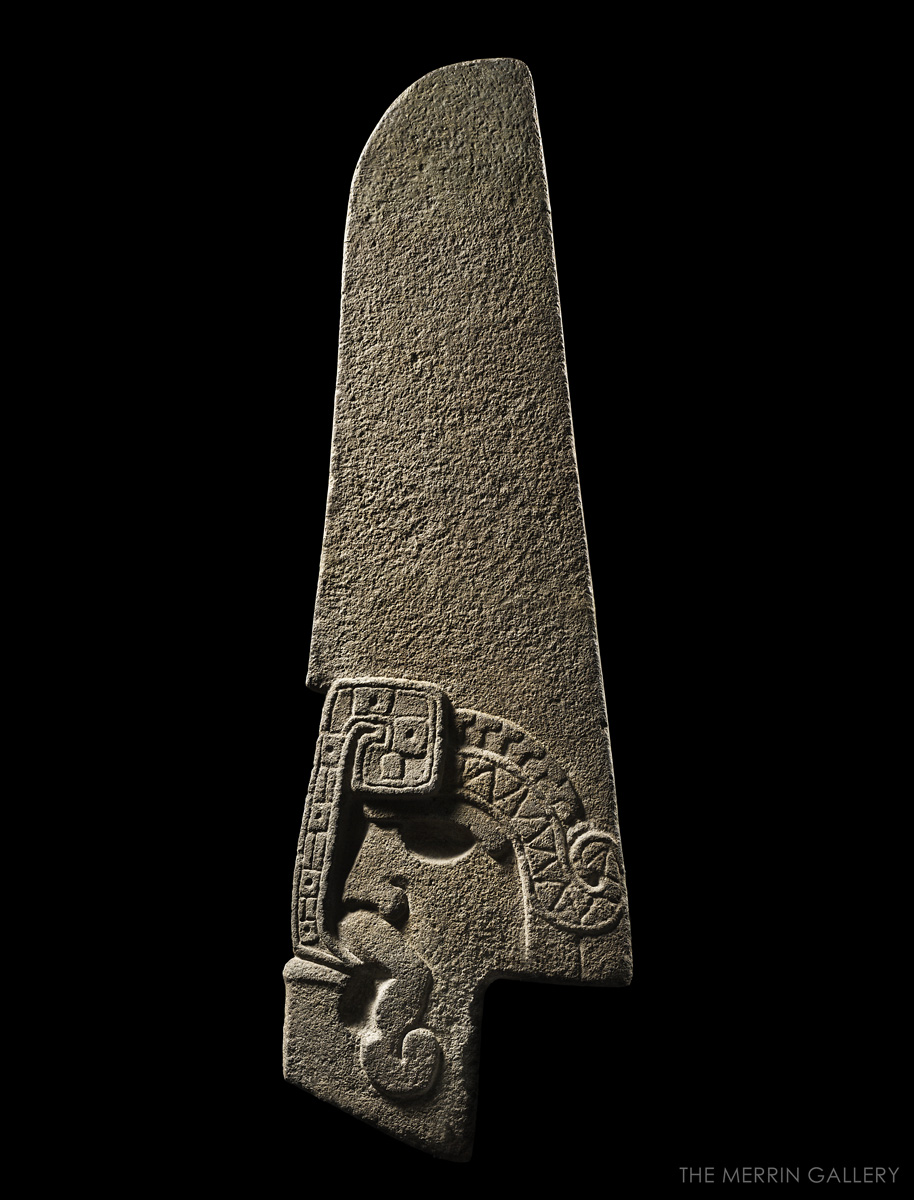 This highly and extremely tall hacha takes the form of a profile head with speech scroll. It is carved on both sides, representing a type of hacha called “thin stone head” type, here elongated to maximum height. It was published by von Winning in Pre-Columbian Art of Mexico and Central America, no. 304 and was called a palmate stone when it was published, though it is really a hacha and not a palma, which spreads out with a broad, semicircular top.

It is spectacular, huge, and powerful. The hacha is shaped like a long knife with a straight, vertical edge in back and an inward curved edge in front. The bottom edge slants upward at the chin and a deep notch, in back, allowed the hacha to rest upon a yoke, to which it was probably lashed. The object is conceived mostly two-dimensionally, although it does have depth. It tapers from front to back and from bottom to top from a maximum of 2 ½ inches to a minimum of ½ inch. The front view presents a narrow spire that soars upward.

The hacha is carved on both sides with identical motifs. A speech scroll emerges from the open mouth and rises in front of the face, curling inward into a scroll at the forehead. In this, it resembles the upturned snout of a Maya long-nosed god. The upright portion of the scroll is composed of square elements with drilled centers interspersed by vertical bars. At the turning of the scroll, the bars are eliminated. Raised bands border the edges of the entire speech scroll.

The face has a strong, Roman nose and overhanging brow. The eyes are deeply excised, perhaps for inlays. The mouth is opened wide with very thick lips forming a chevron, the lower one terminating in an outward scroll. The tongue is carved in front of the mouth and below the speech scroll. His headgear is represented by a sinuous band with incised, interlocking triangles within border bands and a terminal scroll, below a curved band of segmented serpentine scales. The speech scroll overlies the front. A plain, vertical band below the scroll may represent a chinstrap. Likely, this head is meant to represent a trophy head of a defeated ballplayer who yet, magically, speaks.

Von Winning also publishes another tall hacha, (no. 305), found with this one.

Condition: the hacha was broken in three pieces. The oblique bands that are discernible are the repairs of breaks, but the objects is completely without any new material.