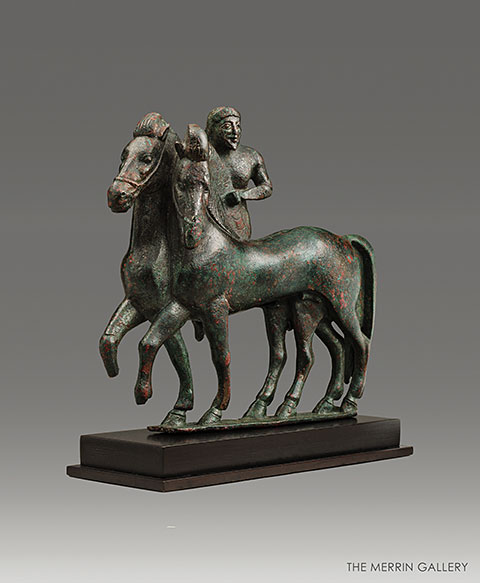 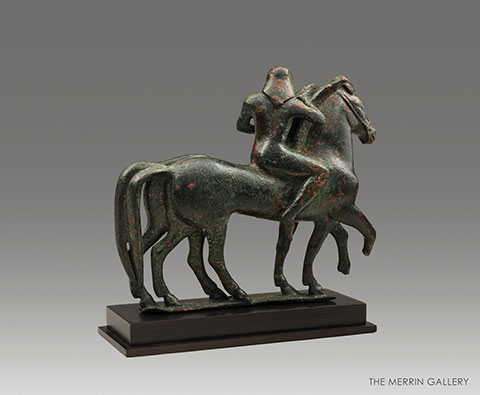 This remarkable statuette depicts a nude male equestrian mounted on the rearmost of his two prancing horses. The rider grasps the mane of the front horse. The two animals are aligned and similarly posed but with slight differences that add greatly to the sense of individuality and vitality. Both animals lift their right forelegs in a sprightly posture; the front horse also thrusts his right rear leg slightly backward. Their long tails, which reach nearly to the ground, echo the elegant curve of the horses’ buttocks. The rearmost horse holds its head erect with a majestic air, while the front horse turns his head slightly down and outward as if observing something or bristling at the bit. The male figure, too, directs his gaze outward and his torso turns in that direction, as well.

Although well observed from nature, the physiognomy of both human and horses is sleek and somewhat generalized without extreme muscular definition. Such artistic expression, or emphasis if you will, is characteristic of the ripe Archaic period, from which this work heralds. That is, the artist tempered the accuracy of details to serve the composition.

The male possesses the wide-eyed and gently smiling expression often found on human figures, whether male or female, during the Archaic period. He sports a beard and his long hair cascades over his shoulders, forming a downward pointed “V” in back. The horses’ manes are striated and carefully coifed with upswept forelocks. Their harnesses are composed of slender strips of leather.

The group stands upon an integral base. Because the forelegs of the animals are lifted in mid-air and were not attached, they were the most vulnerable to loss and, indeed, have not survived past the shins. The bronze has a variegated green patina with areas of deep red.

Small bronze statuettes made by Greek artists display a degree of freedom and inventiveness that sets them apart from monumental works. Though certainly less expensive than monumental bronzes, the statuettes were still precious because of their deluxe medium and because each was unique due to creation by the lost wax technique.