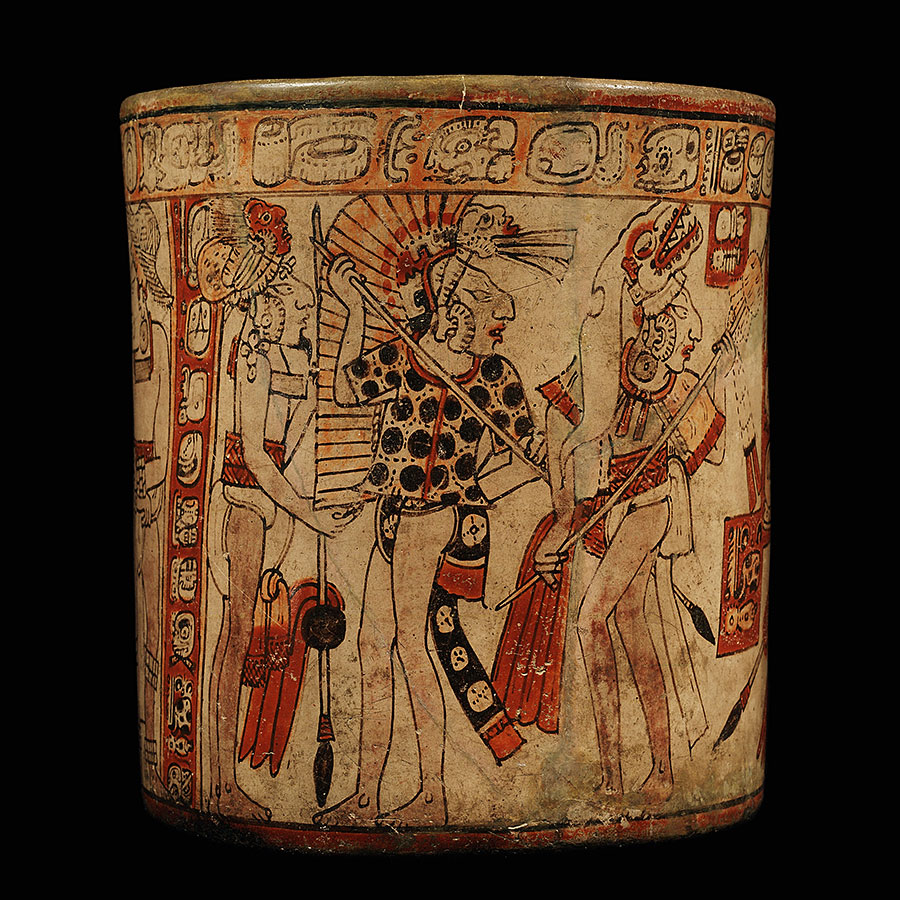 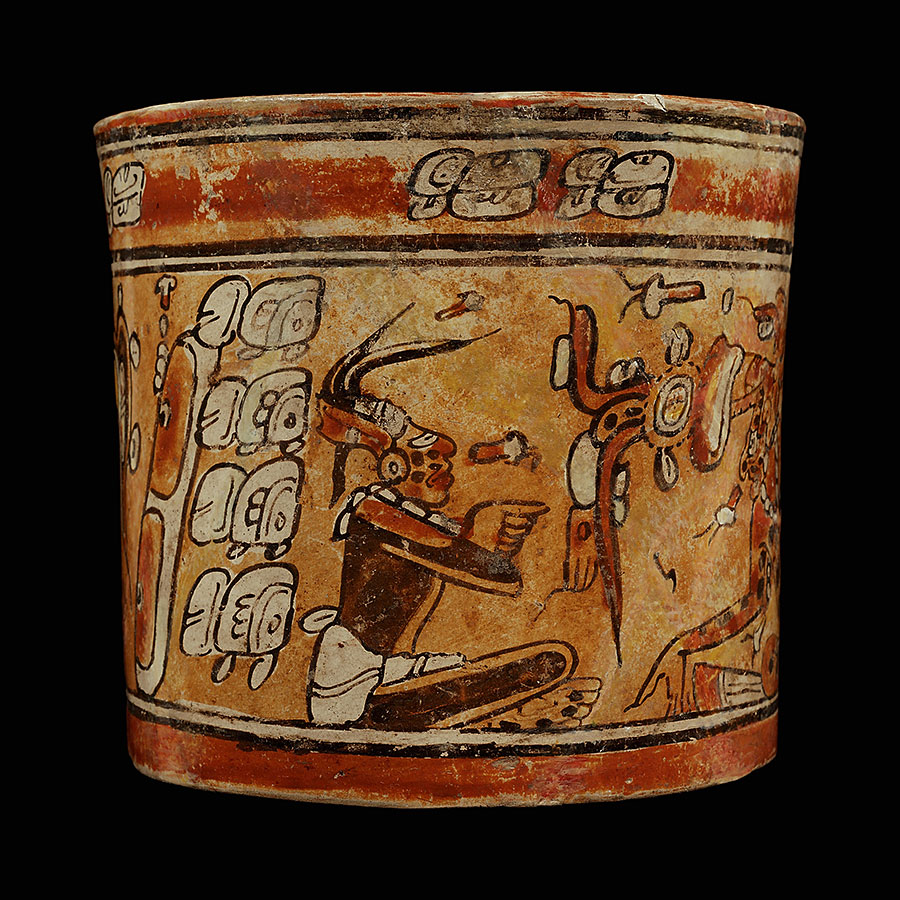 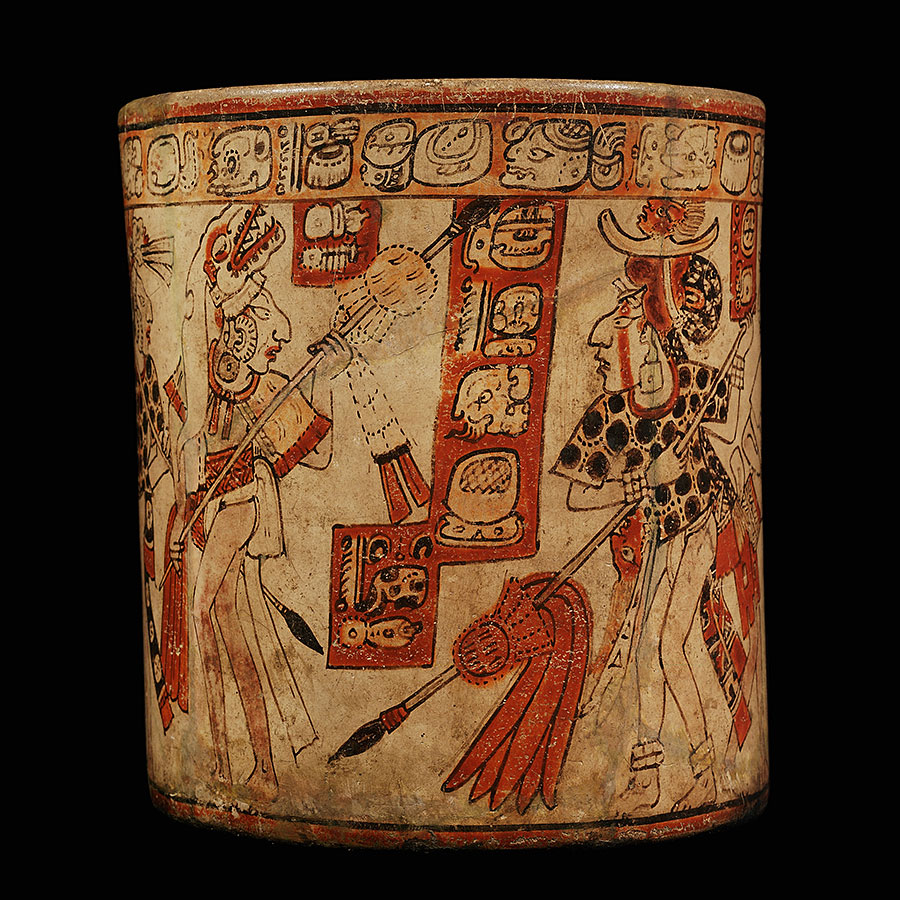 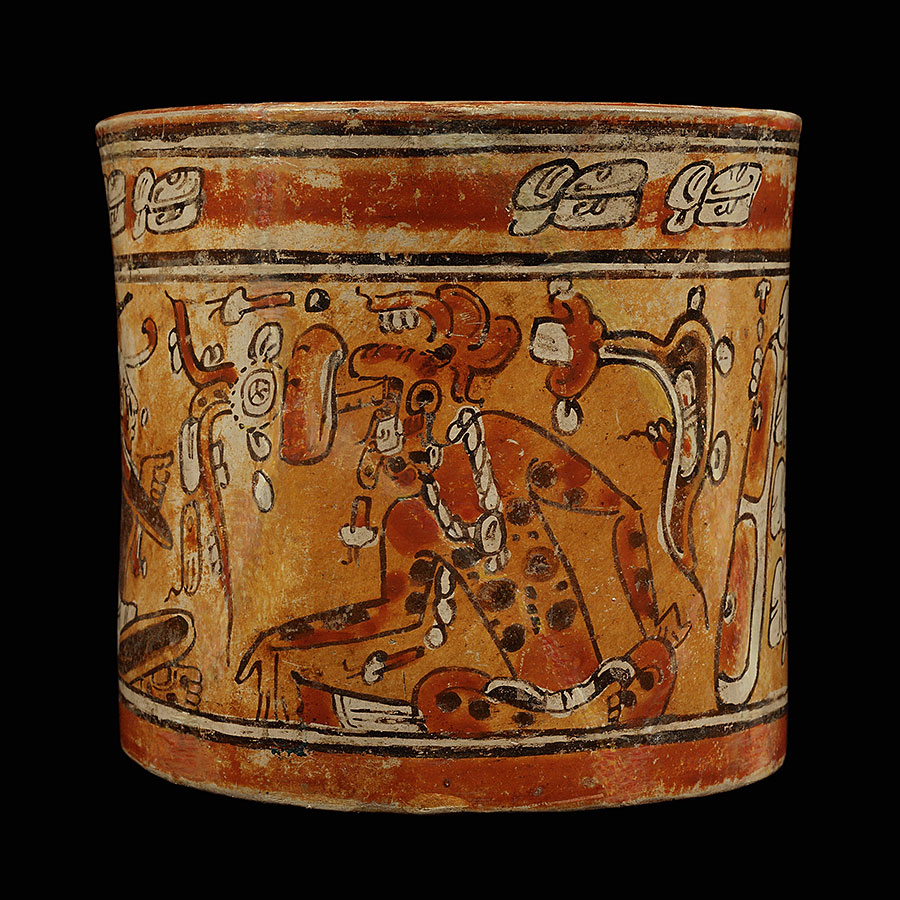 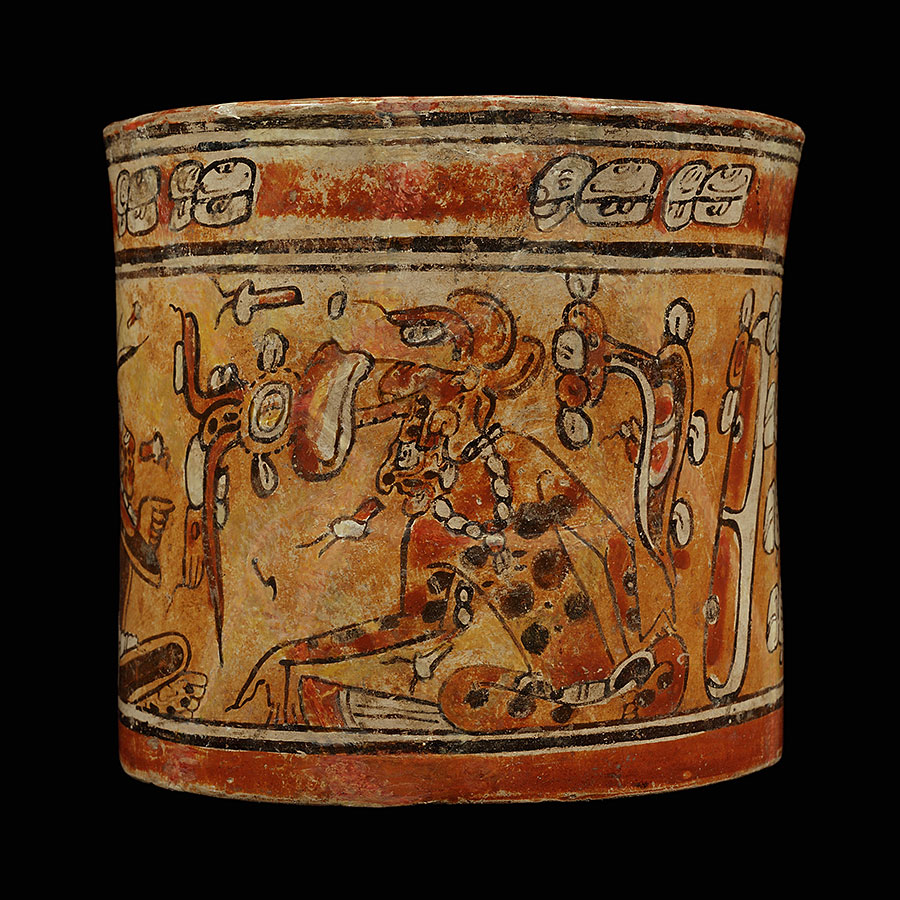 This lovely, slightly-waisted cylinder vase is painted in four color polychrome: white, orange, red, and black. Employing a negative painting technique in certain areas, the white base color is reserved where that color was needed. Orange slip was painted elsewhere over the entire surface and details were highlighted with washes of black and red slip paint. The pictorial area and horizontal glyph band are defined by black and white stripes and red bands encircle the top and bottom of the vase. An additional red band is painted near the top inside. The painting style is quite free and lively.

The scene is composed of two nearly identical vignettes of two seated figures. In each an old god, probably Itzamnah, is seated with his body in frontal pose and head turned as he gesticulates toward a young Hero Twin, who is seated in profile. Posed cross-legged in a position of homage, the Twins have their arms crossed at chest level, with their elbows thrusting outward. Their far hands are fisted and resting on their near elbows.

The Twins wear necklaces, earspools, white loincloths and white headbands that bind their otherwise unruly hair. (Hence, they may also be called Headband Twins in this instance.) One has a stripe running down his cheek. The other has three dots in a triangular configuration on his face. So, we can identify them as Hunahpu and Xbalanque, respectively. The bodies of the Twins are painted black, which suggests that they are momentarily dead, before reanimation – en episode from the Popol Vuh. The spots on their feet reiterate that idea. An unusual and interesting detail is the way in which their thighs, chests, and lower side of their near upper arms are outlined in orange, as if they are backlit and illuminated by a bright light.

Above their earspools and tucked into the headbands are orange, leaf-shaped elements that may represent their feather quills (for painting), conveniently carried for future use. Further, the Twin with striped face, Hunahpu, has a long curling implement that projects forward. This is probably a carving tool. The Twins, therefore, are shown in their guise as artists and patrons to human artists.

The Itzamnah figures have his typical square eye with spiral pupil. His long, hooked nose shows he is an old god. He wears a large jade bead necklace with its counterweight in back, swinging visibly under his armpit. His headdress is a huge and complex contraption with projecting water lily elements and deity symbols. He, too, is covered in “death spots”, indicating his chthonic character.

A vertical row of four repeated glyphs, identified as Secondary Repeat text by Michael Coe, is behind each Twin. A tall bundle at a slight angle acts as a framing device separating the two vignettes. The glyphs running around the top of the vase are four pairs of identical glyphs that comprise the Primary Repeat text.

Such vases were important items of tribute or gifts to further the aims of political statecraft. Ultimately, they were elite tomb deposits. The vase has been recomposed. The surface retains its fine luster.

This piece was acquired by a major U.S. museum.