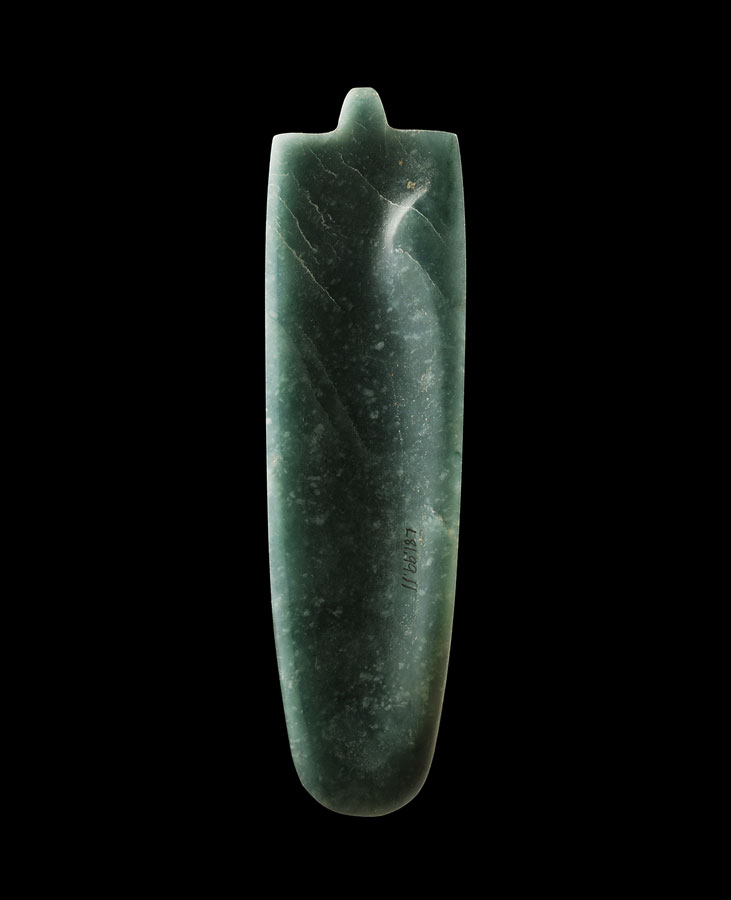 Olmec artisans were unsurpassed in their stonework. They were the first Mesoamericans to master the carving of jade (jadeite), an intractable material they obtained in trade from the distant site of the Motagua River drainage, at the border of Honduras and Guatemala. By using cylindrical drills and abrasive powders composed of jade dust or quartz grains mixed in water to form a slurry, the Olmec were able to transform jade cobbles into majestic works of art. Their favorite type of jade was the blue-green variety. The color naturally evoked water and growing vegetation, both necessary for the survival of the people.

The simplest stone objects made by Olmec lapidaries are axes or celts. Carved stone implements with honed edges were originally lashed to wooden handles. The tools’ importance for clearing fields and chopping wood led to their symbolic function as emblems of power and wealth. Green stone versions also came to represent growing ears of maize, their most important crop. These green stone celts were ceremonially planted in sacred spaces. The most famous such assemblage is “La Venta Offering 4”, in the collection of the National Anthropological Museum in Mexico City (See: Benson and de la Fuente, no. 42). There, a group of sixteen stone figures, gathered as if for a solemn meeting, stands within a sacred maize field comprised of six vertical celts, planted into the soft earth.

This exquisite jade object is a ceremonial ear of corn. It is basically a celt, an oblong with rounded bottom and honed edges on either side. Instead of having a broad curved top, however, it has a perfectly finished flat top with a nubbin projecting from a v-shaped groove in the center. The v-shaped cleft in the heads of some Olmec figures represents the fissure in the earth from which maize sprouts. Sometimes, the cleft is embellished with the budding plant emerging. A votive axe of the Corn God in the collection of the Denver Art Museum (ibid, no. 112) depicts the nascent plant emerging from the notch at the top of his head. It is identical in form to the tiny protuberance on our ritual object.