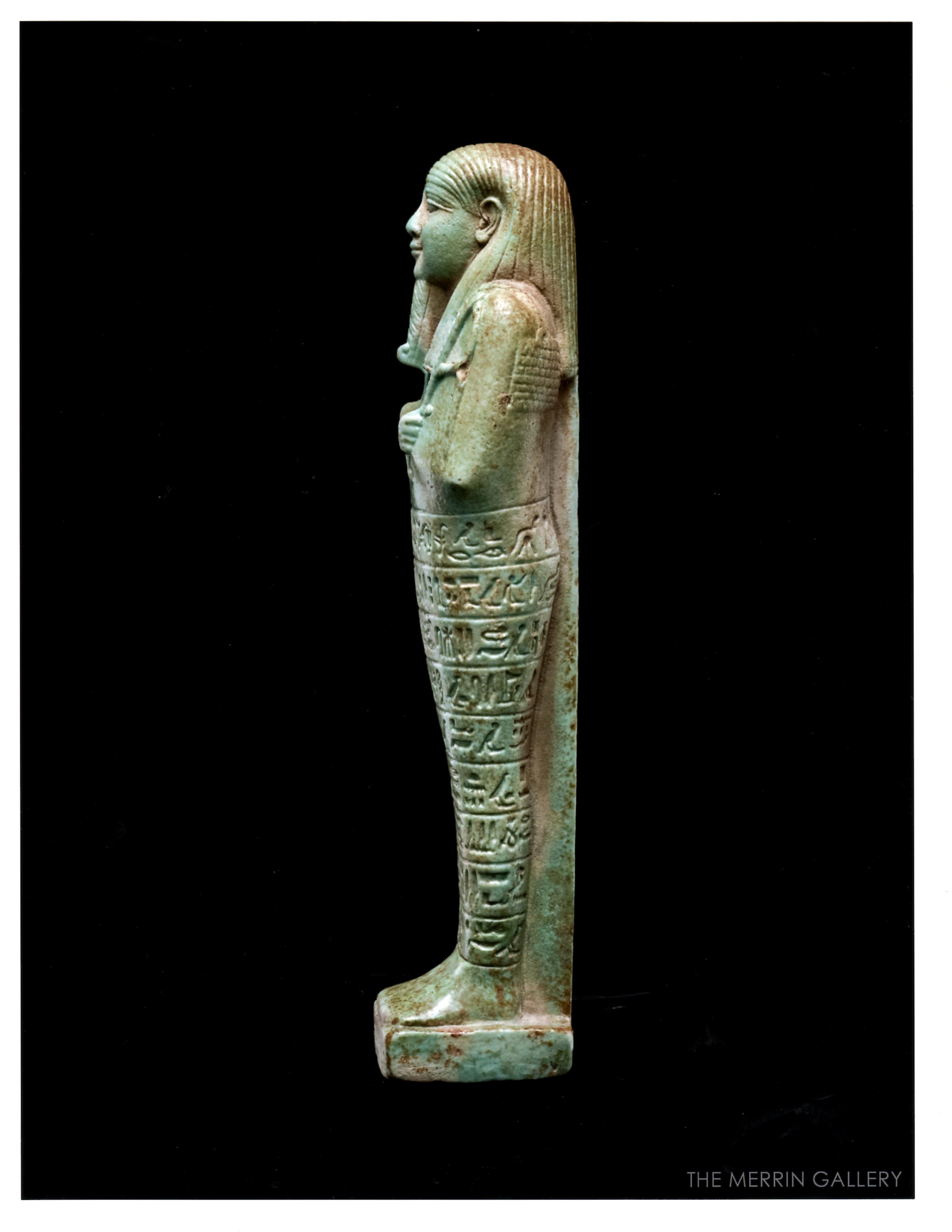 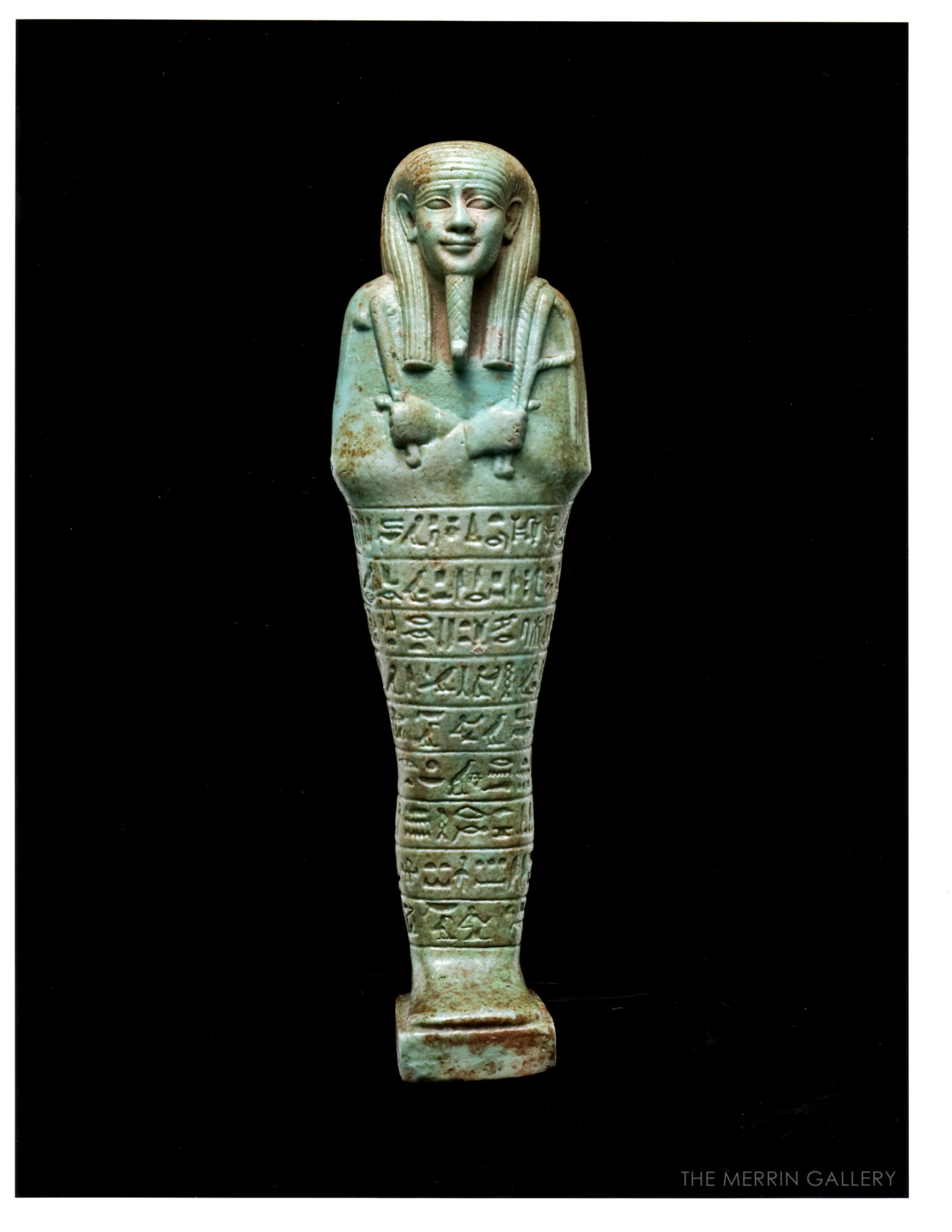 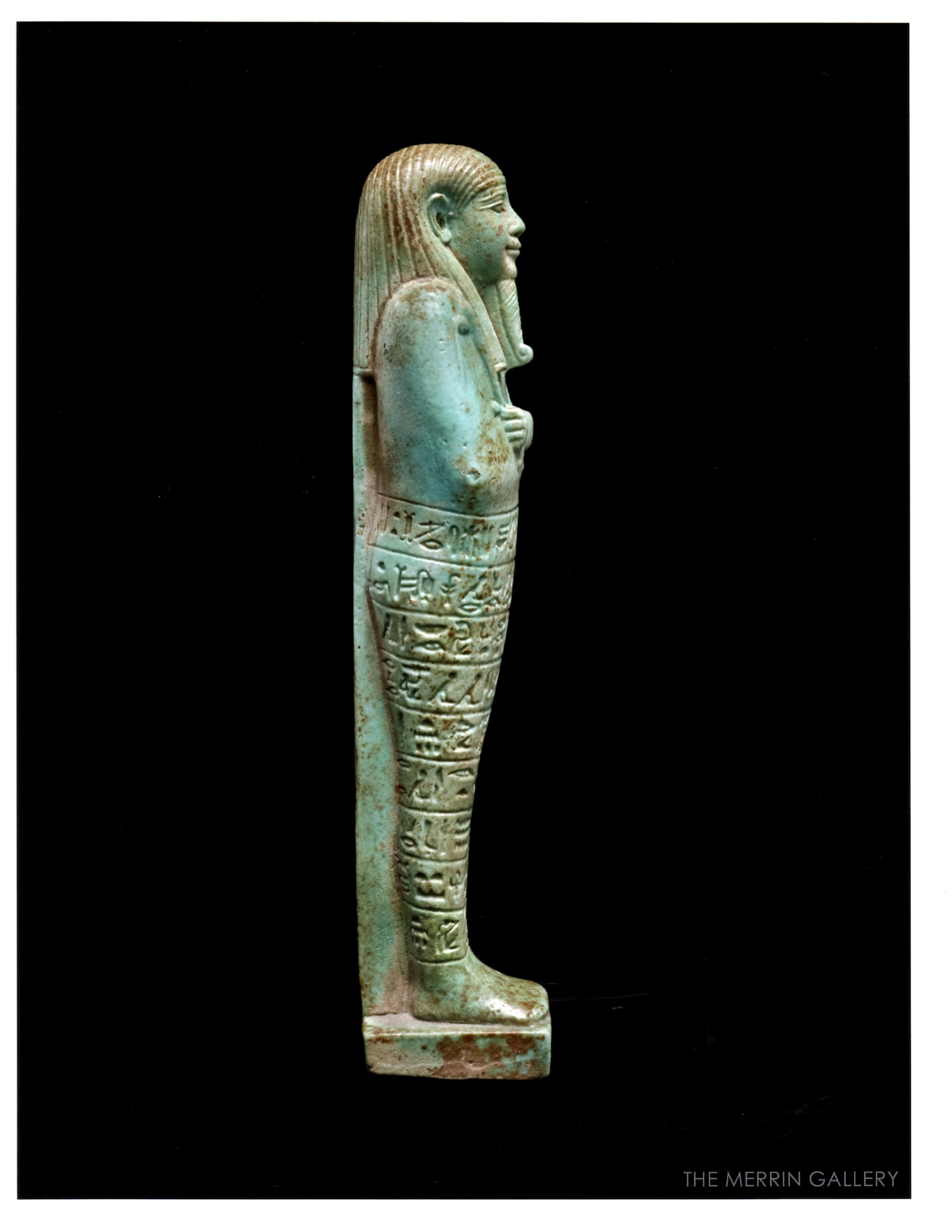 The shabti was an important component of Egyptian funerary rights. It was believed that the realm of the afterlife was identical to the living world with the exception of death and sickness, and that such necessary activities as farming, basket weaving, and construction of public monuments to the god Osiris, lord of the underworld, would be undertaken by those who had departed this world. To spare the deceased from having to work during their afterlife, and living servants from being sacrificed to the same graves that held their masters, the shabti was placed within the tomb. An inscription with a spell from the Book of the Dead would allow it to become animate upon its master’s command and free them from toil in the Land of the Dead. For this reason shabti (also known by the names ushabti or shawabtys) were known as “answerers”. They responded to demands made upon the departed – whether commoner, nobleman, or royal – in the afterlife. By the 26th Dynasty, in which this particular shabti was carved, they were regular fixtures among grave goods and often a fair indicator of wealth. The richer one was in life, the more shabti were commissioned to work for the entombed in death.

This impressive shabti is well crafted from blue-green faience. The shabti wears a striated tripartite wig, braided false beard, and a gentle smile on its delicately carved face. Eyebrows and the cosmetic lines around the eyes are carved in light relief, raised just enough to call attention to their presence. The mummiform figure holds a pick and hoe in crossed hands with a seed bag over the left shoulder which is cross-hatched to show its straw or rush construction. Below the shabti’s hands are nine horizontal bands with the shabti’s spell and the name of the deceased pharaoh for which it was created: Psamtik (also spelled Psammetich or Psammetek), likely Psamtik III, last pharaoh of Egypt before the Persian conquest, during whose reign this shabti was made. Inscribed upon the first of nine bands of hieroglyphic writing that wraps around the mummiform figure are the words ‘…The Illuminated, the Osiris, the Overseer of the writers of the royal meal, Psamtek, beloved of Neith, true of voice, he says (..)’ The referenced Neith is an Ancient Egyptian goddess, and the patron deity of the town of Sais from which the father of the pharaoh originated.